Commercial fishermen trawling off of the Outer Banks of North Carolina are slaughtering thousands of striped bass in “culling” operations and tossing them overboard trying to keep larger stripers and remain under their 50 fish limit.

Both recreational anglers and smaller operation commercial fishermen have been aghast at the actions of the trawlers who are wiping out massive schools of stripers and discarding smaller fish to stay under the state 50 fish creel but maximize their profits.

A video of the striper carnage has been posted on You Tube showing some of the thousands of floating dead fish left in the wake of the trawlers. Outer Banks fishermen who are witnessing the fish kill have been taking to message boards and calling authorities to protest this striped bass massacre.

“It’s an atrocity,” said Captain Aaron Kelly, a top striper guide with over 15 years of experience on the Outer Banks. “It’s gone on before but I think this was the first time it was in front of such a large crowd.”

Captain Kelly said that the day before the video was shot he and the members of his charter followed one trawler for five miles leaving a long wake of dead stripers.

“It’s like they have an endless quota,” he said. “Under the actual numbers are so many dead fish. It’s a frightful waste.”

The striper trawling season is not set to close until this Saturday, January 20. The fishery can be closed earlier if a certain quota is reached, but the quota does not count the thousands of dead discards.

Captain JH Miller was on the water the day the video was made and called the scene “disturbing.”

“I’m not anti-commercial fishing in the least bit, but there is no justification for leaving miles and miles of dead fish out there,” said Captain Miller. “These were legal-sized fish just thrown away to die.”

Striped bass have to be 28 inches in size to be kept legally, and all of the charter captains confirmed that among the thousands of dead stripers were many that were over 28 inches and in the 15 pound range and higher.

Captain Ray grew up in the area and has fished the Outer Banks for decades.

“It’s happened before but this year is the worst I’ve ever seen it,” said Captain Ray. “I saw three huge masses of dead stripers from Nags Head to Kitty Hawk. It would be so much simpler if they were allowed a certain amount of pounds and would come in when they caught that many. I have no clue about why they allow this kind of sickening discard.”

Because the trawlers are inside the federal 3 mile limit and not keeping over 50 stripers they may not be technically breaking the law by killing scores of dead fish and throwing them overboard in order to keep netting.

Both Captain Kelly and Captain Ray said the Coast Guard was flying planes and helicopters very low over the area and must have seen the carnage. The Coast Guard has been closely monitoring recreational and smaller commercial fishing boats during the striper season.

Captain Miller said he called the Division of Marine Fisheries hotline for violations today and was told no one was working.

“Even if they are not breaking the law you’d think the Coast Guard could get on for just the pollution like they do the menhaden boats,” said Captain Ray.

The charter captains said that some recreational boats simply gaffed some of the legal stripers and took them aboard to count towards their limits so the fish would not be wasted. 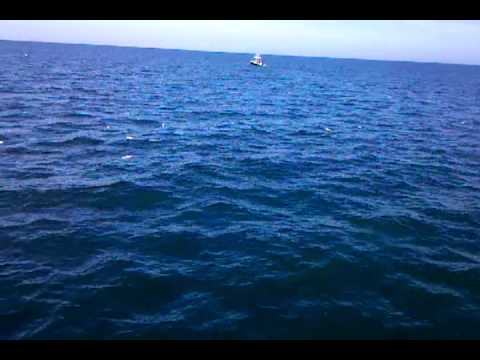